Home | Smartphones | What is a smart flip?

What is a smart flip? 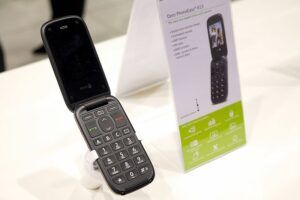 Are you wondering what a smart flip is? Have you heard of this term and don’t know what it means? Today I am doing to be discussing this and explaining their features and also their differences with smartphones. Smart flips have been around for a few years and are getting popular these days even though normal flips phones are becoming less popular. There always people that are looking to try something new and a smart flip can be a great option for these kinds of people.

Smart flips make it easier to get things done than with a normal basic flip phone. Basic flip phones allow you to make and receive calls and text, set alarms, use the calculator and utilities and some of them allow you to browse the web but it can be a tedious and lengthy process. Smart flips allow you to do all of these things and more a lot easier which I am going to be discussing and outlining for you in this article. Smart flips are interesting and I just know that you are going to love them.

What Is A Smart Flip?

A smart flip is a flip phone with an updated engine. They are made of plastic and are durable making them decent phones. Smart flips can have a touchscreen but not all of them do. They still have the same design and layout of a normal flip phone but they are updated software wise and allow the user to use the phone easier and also do more things that you are not able to do on a normal flip phone. A smart flip is a good phone but it is not for everyone although it can be a good companion.

The Features Of A Smart Flip

Smart flips have a 2.8 inch display and some of these phone have a slightly larger display of over 3 inches. Some of them also have a touchscreen making it easier and quicker to use. A lot of them have big keys and number making them easy to see and press. The display is also clear and easy to see despite being small while on the outside of a smart flip you will find a camera, volume button, speaker phone, headphone jack and a micro USB charging port along with the brand name.

The call quality is good and text messages work fine. Most smart flips are 4G but have support for 2G and 3G networks built into them as well. The camera is usually around 2 megapixels but sometimes it can be slightly more or less. The picture quality is not good and not all smart flips have a front facing camera for selfies. Battery life is good and lasts about 3-4 days on general use. Smart flips also have a radio, utilities, maps, multimedia player, app store and internet browser.

There are many apps available on a smart flip and it also includes an app store for downloading additional apps. The apps include YouTube, google maps, file manager and many more. There is also a google assistant and it is pretty decent. There also alarms and utility apps such as calculator, stopwatch, world clock and more. Smart flips also have a web browser which is usually Firefox or google chrome depending on the operating system that the phone is running.

The internet is pretty quick and apps generally run well on the phone. The internet cost mobile data and some smart flips can connect to WiFi as well. WiFi also works pretty quick and well on the phone. Browsing the web on a smart flip can take a bit of time and can be annoying but it does look and feel decent enough. The web browsers do have updates released for them sometimes but not as often as they are released for smartphones. But despite this the web browser still works pretty well,

Social networking is also available on smart flips through the app store on each operating. There is no Instagram but you can download Facebook, twitter and whatsapp. It will take a bit of getting used if you want to use social networking on a smart flip but it isn’t that bad once you get the hang of it and become faster. The google assistant is good on each operating system and allows the user to hold down the ok button and speak into the microphone to search for a query or ask for help typing a text message.

Smart flips are quite different from smartphones and they have limited functionality. They are the next step up from normal basic flip phones and can be useful for older people and people who are not tech savy. Smart flips are cheap and start at as little as $79 and make a nice change. Smart flips can also be nastologic and a trip down memory for many people as they do bring back many memories of flips phones and the old days. If you want to buy a smart flip you have nothing to worry about because they are a reliable companion to have.

Which smartphone is the best?

Which smartphones are cheap?

ABOUT THE AUTHOR Timothy Balla